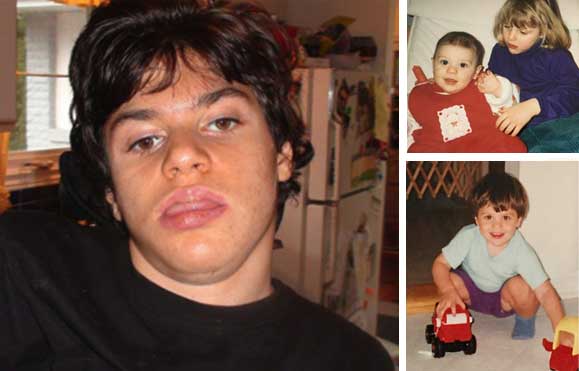 Colton was born on May 14, 1998. A fast, “get it done” kind of guy from the start, (born in under 3 hours!) Colton’s deep brown eyes melted hearts and somehow connected him with people’s souls. As a young child, Colton hardly ever walked, he only ran, (like the horses he was so fond of… our young “Colt”!)

At age 2, Colton was showing signs of what we thought might be autism — he was fascinated with lights, and would trace bricks on buildings with his hands (“stemming”), but autism was ruled out medically. Meanwhile, he ate like a champion, tinkered with toys including his trucks and school buses (his favourite!), swam any time he could get into water, laughed from the depths of his toes, and… ran.

Colton wasn’t quite 3 when he had his first drop seizure in January 2001. Since his sister Carling had been diagnosed with Late Infantile NCL a year earlier, we knew that Colton had a one-in-four chance of having the disorder. Both parents have to be “carriers” for a child to develop Late Infantile NCL. With Carling, it took a year and a half to get a diagnosis. When Colton had his first tonic-clonic (full) seizure, his Dad drove him straight to Sick Kids in Toronto. His diagnosis was made within a few hours. They knew what to look for.

Colton’s quick diagnosis allowed him to start taking anti-convulsive medication right away. The brain learns the activity of having a seizure, so the earlier the seizures are controlled, the less ingrained the activity becomes. This was definitely a win!

As mentioned in Jarrett’s section… we knew that science was progressing in both Enzyme Replacement and Stem Cell Therapy areas. John and I had decided that if Colton did present with NCL that we would increase our likelihood of having a donor-match stem cell source if there was a healthy sibling to provide them. 8 months after Colton’s first seizure, Jarrett arrived. He must have known the plan, and decided to step up the timeframe a bit.

From minute one, Colton and Jarrett were close. We would have to keep a close eye on young Colton, as he would race to Jarrett’s side — so excited to see him, that he would squeeze his eyes closed and tremble as he reached into Jarrett’s baby seat and tried to hug him. He usually ended up clapping his head with both hands. Jarrett developed a toughness pretty quickly! They would play “eye” games… widening their eyes as they stared at each other… then Colton would throw back his head and laugh.

Even as Colton grew older and more medically fragile, the brothers continued to share a room. (fortunately Jarrett could sleep through anything, including the sounds of all his brother’s night time care). 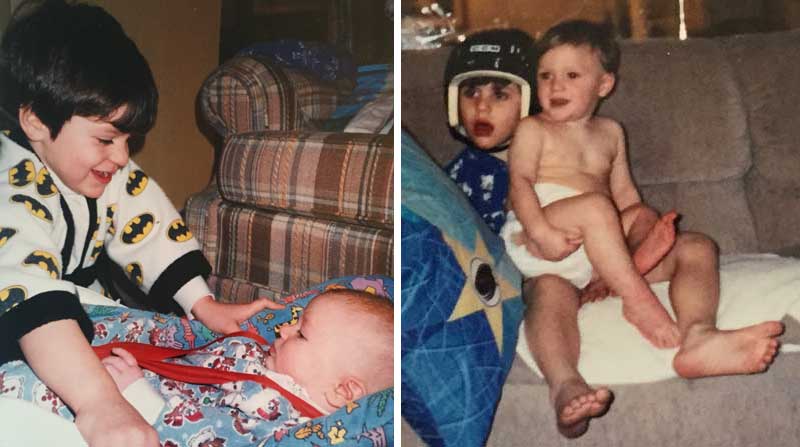 From minute one, Colton and Jarrett were close. We would have to keep a close eye on young Colton, as he would race to Jarrett’s side — so excited to see him, that he would squeeze his eyes closed and tremble as he reached into Jarrett’s baby seat and tried to hug.

When Colton was 5, both he and Carling received a wish from the Make a Wish Foundation. One option was to meet a hero. Colton’s hero was Baloo, the bear in the Disney movie Jungle Book. So in 2003, we found ourselves travelling to Florida with two special needs children, a baby, two capable family support members (Robin and Beau) and 21 pieces of carry on luggage! Colton indeed met Baloo. He also really loved the chance to swim in the pool every day at Give Kids the World Village in Orlando.

In 2005, a year after his sister passed away, Colton was invited to participate in the control group of a research project at Cornell University (at New York Weill Medical Centre in New York City). Ten children were undergoing an enzyme replacement therapy (Colton was not selected to be one of them), which would hopefully halt the progression of the NCL disorder. Colton’s role was to demonstrate progression of the disorder without the enzyme replacement. He underwent extensive testing, and then we brought Colton back to New York City a year later to repeat the testing.

While Colton had some progression over the year, it was not significant. The neurologist working on the project gave perhaps the most encouraging comment when he said “I don’t know what it is you’re doing, but… Keep doing it, because Colton is doing very well”. This WAS encouraging news. As a family we invested significant time and almost all our resources in Colton’s well being, including driving thousands of miles each year to appointments to fine-tune his health with complementary health solutions.

In 2005, Colton also got a feeding tube (G-Tube) to help him manage food which was becoming unsafe for him to eat by mouth. Like his sister, he then didn’t have to taste his medicine and herbal remedies, as they were given to him, along with blended food and vitamins through his G-Tube. He also had a lot higher intake of fluids — water and juice made fresh twice daily from the juicer, which helped his health.

In 2008, Colton travelled to Bangalore, India with 8 other team/family members for a life changing stem cell brain surgery. (see Stem Cell trip to India). It was an amazing experience and sincere thanks are extended to the extremely professional and capable team at BGS Global hospital for this very positive contribution to Colton’s journey to health. Special thanks as well, to Maria Leslie who traveled twice to India… once to support the team, and previously, (with Diane) to donate her stem cells to be harvested into the 68 million cells Colton received in surgery!

Colton attended public school at Charles R. Beaudoin school in Burlington. He had two educational assistants (EAs) who shared the role of helping him integrate into regular curriculum activities wherever possible. Colton had a special affinity for music, and the school, his teacher, and the Special Education Resource Teacher (SERT), supported extra music learning for Colton as well as time in the sensory room. Colton’s vision was not as strong as it once was, but he still loved taking the school bus (one of his favourite things to look at when he was younger). Colton’s biggest joy in attending school was being with friends and feeling “normal”.

In Grade 7, Colton also had a nurse who attended school with him full time. Actually the way the system worked, he had a team of nurses who attended with him on a rotating basis. This was alongside his EAs. His team was growing!

He was blessed to have a special friend a year older than him, Kyle Woods, who from the time they were in a shared grade 2/3 class, would look for ways to hang out with Colton. (sometimes hijacking him from his EAs at recess to go play with the other kids).

When Colton graduated grade 8 — a huge milestone that very few Late Infantile NCL children get to experience, Kyle came back from high school to bring Colton to the Grade 8 Grad dance. (No parents allowed after the first dance). The coolest part of the evening was looking in through the doors as Kyle and Colton disappeared into the darkness and loud music — into a throng of beautiful grade 8 girls in prom dresses, and seeing the flashes of all the cell phones as the photos were being captured of the friends. It was the best night of Colton’s life.

Colton (and his family) donated an Inukshuk figure which sits in Carling’s garden at the side of Charles Beaudoin school, as a tribute to the importance of people whose paths we cross. A gift to all his friends at CRB.

When Colton went to high school, at Robert Bateman in Burlington, the structure was such that he was not allowed to attend regular classes. They have a Centre for Special Needs Kids, with extensive support, and provisions for an awesome EA and Colton’s nurses. It was good in many ways for Colton, who needed the extra support, but a shock to him as well — after spending 9 years in a system with his peers who were healthy “regular” students.

So we did what every high school student does if they want to make friends and meet people. Colton joined a club. We picked Youth In Action — as it was a student advocacy group, dedicated to helping causes around the world. Perfect! Colton (and Mom) would attend after school one day a week, and enjoyed the small roles Colton was assigned — to collect money for donations month, ask for support from local mall retailers for the Fashion show, and help count money from the fundraising ventures. (Colton did this hand over hand)… Just being part of it made Colton feel good. The fact that everyone just let Colton blend in, was even better.

In high school, we discovered that Colton also had a love of art. His favourite was painting (hand over hand). What a beautiful Christmas gift we received in 2012. A reproduction of Monet’s “Chinese Bridge Over Water” done on 4 canvases. Beautiful!

It was very heartwarming in 2013 when Robert Bateman High School introduced the Colton Gill memorial award, to acknowledge a student(s) who show outstanding leadership though inclusion.

Colton’s health had been improving since the India Trip, and then we a setback in January 2010 — He was in Sick Kids’ Hospital with a pneumonia, then a secondary infection. After this, respiratory issues became more of a focus. Colton continued with his very busy regime of Physio, Osteo, Chiropractic, Massage, Indigenous and Quantuum Healing. He also received daily physio stretching from our wonderful Nanny Cathy Castillo who joined us under the new Canadian Program, from the Philippines.

While Colton’s care became more complex, with the addition of a Tracheostomy (Trach) in 2012, and a Vent (for his high CO2), Colton continued to show signs of improvement. A highlight of the day was seeing Colton stretch his arms and legs when his face was washed in the morning! This was new since his surgery)

A lot of people worked very diligently to support Colton’s very involved health routine. Making sure he got into his stander (which allowed him to weight bear) sometimes twice a day, helping with food, fundraising, finances, personal support. Colton brought out the best in us, and showed everyone what they were made of.

Colton’s decision to pass through life’s veil March 6, 2013 during an admission at Sick Kids to regulate his CO2 levels and his equipment, was a surprise to all. In true Colton style though, he made up his mind, and did it. His light must have been needed to serve on the other side.

Colton’s wishes and contribution to opening hearts, lives on through his legacy, Project Possibility. A gift back to the country which gave Colton so much… 283 Health Projects (Colton’s choice of numbers), in India which we are fundraising for in Colton’s name.

Free The Children will make the health Projects happen. Our role is to raise the money to pay for them.

As we learned from Colton, so much good can happen in the world when we just open our hearts.